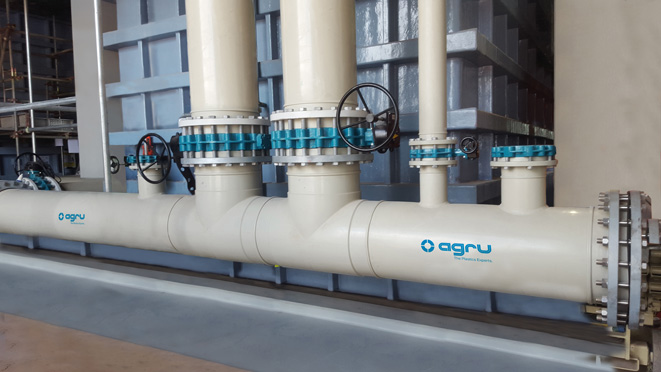 AGRU GmbH was privileged to be part of the design and implementation processes in a record-breaking HDD-installation of PE pipes with OD 1400 mm, in Germany.

For a large-diameter, twin-pipe culvert underneath the Spree river in Germany, AGRULINE PE pipelines with ODs of 1400 mm and 1200 mm were installed trenchless. Supplied by FRANK GmbH and manufactured by AGRU GmbH, the Dutch company Visser & Smit   Hanab,  as a subcontractor specialised in this method, installed the PE pipeline by applying the horizontal directional drilling process. In this size a true world premiere!

The brown coal for the the Schwarze Pumpe brown coal power station is excavated in the nearby opencast mine in Nochten. As the brown coal stratum lies below the natural groundwater table, the water table needs to be lowered. Two parallel underground GRP pipelines are used to transport the groundwater and mine water from the mine to the mine water processing plant. The two pipelines crossed the Spree river on a pipe bridge close to the town of Spreewitz.

Several floods in 2010, 2012 and 2013 in the area around the pipe bridge near Spreewitz resulted in a pipe rupture in a GRP bend in Nochten Water Pipeline. Thorough repairs on the existing GRP pipelines would be very time-consuming and have an excessively high impact on mining of the brown coal, which can only operate without the pipelines for a few days. The complex repair of the damaged section would not rule out the risk of further damage to other sections around the pipe bridge.

A new installation using the horizontal directional drilling method with pipes made from PE 100-RC was the most economic and easiest solution to implement. Pipes made from PE 100-RC are permanently resistant to corrosion from the mine water transported here. Given their high flexibility, wash borings with small installation radii are also possible. Any ground subsidence that occurs can be absorbed by the permissible deformation of the pipes without the danger of damage as a result of cracks or breaks. AGRULINE pipes made of PE 100-RC meet all the requirements and are tested and approved in accordance with PAS 1075 for trenchless laying techniques.

The benefits of the horizontal directional drilling method in this particular instance include the relatively minor impact on nature and the environment and the least amount of underground construction work requiring drainage. Being approximately 6.5 m below the bed of the Spree meant that piping in the section of the wash boring would need a wall thickness of SDR 17.

Visser & Smit Hanab received the contract from TrappInfra Rohrbau Welzow GmbH to perform the wash boring using the horizontal directional drilling method. As a first step, the construction team drilled two pilot borings from the west to the east bank of the Spree. An underground channel was then drilled with one of the most modern horizontal directional drilling systems, which cuts holes with a diameter between 30 and 180 cm, and is able to withstand tensile forces of up to 450 tonnes. Visser & Smit Hanab advanced the drill string along the planned path, adding segment after segment of drill pipe, guiding it precisely down to the centimetre with the help of a gyrocompass.

For the wash boring, two conduits approximately 220 m long were prefabricated, one in each of the sizes OD 1200 mm and OD 1400 mm, welded together out of individual 13 m pipe segments. The conduits with a weight of up to 76 tonnes were positioned on roller blocks in order to reduce the force required to pull them in. Constructing a culvert made of PE pipes of this size was an engineering world premiere. Nothing comparable had ever been tried before.

Once the borehole had the required diameter along its entire length, work could be started to pull the prefabricated and tested PE pipeline back through. The biggest challenge came right at the start: the giant pipeline had to be threaded into the borehole. For this, the construction team lifted the section of pipeline closest to the borehole, while at the same time pulling it towards the hole. The 1400 mm thick pipeline slid into the drilling fluid in the borehole trench and, thanks to its great flexibility, automatically adapted itself to fit the exit angle of the borehole precisely. It was possible to complete the record-breaking wash boring successfully and to the relief of all those involved.

Jorn Stoelinga, Horizontal Directional Drilling Consultant at Visser & Smit says: “We are proud to be the first to have successfully laid such large diameter PE 100 pipes using the wash boring process. They were easy to weld, and also very easy to pull in thanks to their flexibility.”

Forward to the Product Catalogue.